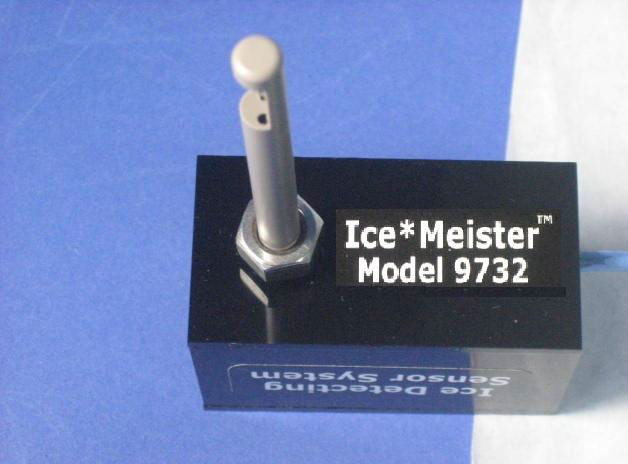 Figure 1 — Model 9732-PLASTIC aviation ice detector is a commercial, off-the-shelf, in-flight ice sensor that monitors the optical characteristics of whatever substance is in contact with the optical surfaces of the probe, either air (NO ICE) or water ice (ICE ALERT). Ambient wind blows standing water away, but ICE sticks. Made of nonconductive *PLASTIC, probe is electromagnetically compatible with its host aircraft’s radio environment.

The product consists of a unitized probe, circuit board, housing, and cable. The probe is a Delrin plastic cantilever that holds two optical windows and a reflecting wall below the wing, out into the airstream.

Ice forms and is sensed on any of the optical surfaces.

The probe’s inboard end mates with a small interface board, the size of your thumb. The board is submerged in rock-hard epoxy inside the housing.

A lightweight, shielded 5-conductor blue cable connects the unit to its host system. The cable is jacketed in tough FEP teflon, specially formulated for harsh environments. Standard length is 10 feet, but it can be shipped in virtually any length on special order.
9732 is plastic, has no MHz clock, no moving parts. It is robust, potted in rock-hard epoxy with no exposed electronics, submersible, and solid as a brick. Made of non-conductive Delrin plastic, its probe is radio-frequency transparent, and can be installed in close proximity to radio antennas.

The unit installs from inside the wing, extending down, facing forward into the air stream. It is fixed in place with a 5/16”-24 thread and stainless steel nut, just as an ordinary Outside Air Temperature gauge installs in a general aviation aircraft

The excitation signal is created and received by the interface board. The board interprets and outputs transducer signal variations as ice alert (001), more ice (011), saturation ice (111).

9732 is sensitive to H2O phase-change between liquid water and solid ice. The probe itself does not detect ice. It is a passive cantilever-holder for the optical ice sensing elements in the air gap. When ice forms, it forms directly on the optical surfaces, thus its sensitivity.

In-flight ice sensing occurs when molecules of ice appear on the surfaces of the exposed optical surfaces.

Ice formations on an exposed surface in an icing domain can be either clear ice or rime ice, depending upon atmospheric variables. 9732 detects clear ice by its optical index-of-refraction, and rime ice by its optical opacity, both simultaneously. If it is necessary for the pilot to differentiate between clear and rime ice formations on the airframe, 9732 reports its presence by annunciating SATURATION ICE directly, skipping over intermediate ICE ALERT and MORE ICE states.

Air is in contact with the probe. The probe senses air, and reports NO-ICE.

IN ICING CONDITIONS, H2O molecules bind together and accumulate on the optical surfaces as a solid, resisting removal by the ambient windstream. ICE is in contact with the probe. The probe senses ICE, and 9732 reports one or more of three icing conditions: ICE ALERT, MORE ICE, SATURATION. See the red panel below:

9732 installs downward from inside the wing’s undersurface, air gap facing forward. This maximizes sensitivity, helps protect the probe from unwanted UV and IR radiation, and shelters the probe from precipitating dirt and other debris while the aircraft is parked on the tarmac.

The probe shaft is fixed in place with a stainless steel nut on its 5/16-24 thread at the base of the probe, same as an Outside Air Temperature gauge per FAA TSO-C43c.